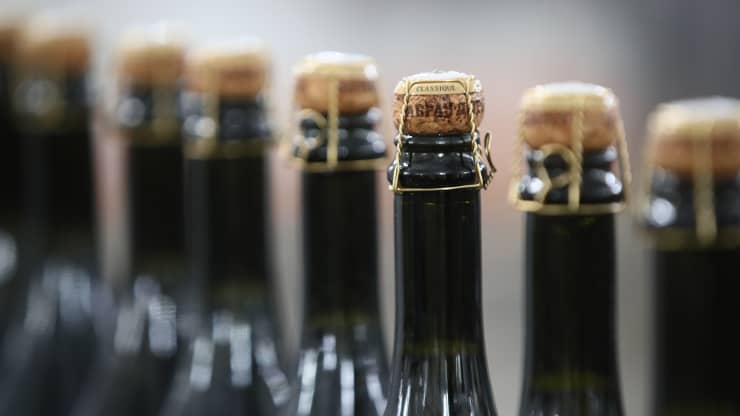 Russia upsets France with new Champagne law: Here’s what you need to know

French Champagne producers have been left fuming over a new Russian law that they say tries to undermine their world-famous brand.

Champagne is a region in the northeast of France, but more famously is the name of the sparkling wine produced there.

The same law allows Russian producers of sparkling wine to use “shampanskoye” — the Russian word for Champagne — on their bottles.

“We are just shocked,” Charles Goemaere, director general of the Champagne Committee, a trade association that represents independent Champagne producers and houses, told CNBC on Thursday.

The “first financial damage,” he said, is that producers “are unable to export champagne to the Russian market despite (previous) orders.” Changing labels on bottles that are ready to be shipped would be a technical and financial challenge.

The French Champagne industry asked its members to halt shipments to Russia for now, stating that the name “Champagne” is protected in over 120 countries.

In 2020 alone, Champagne producers exported 2.6 billion euros ($3.07 billion) worth of bottles globally. The top buyers were the U.K., the U.S., and Japan, according to data from the Champagne Committee.

The protection of the name “Champagne” comes under what is known as “geographical indications” or GIs. This concept in international trade recognizes that certain signs, usually names, identify a particular product with its territory. In essence, the quality and reputation of the item is attributed to its geographic origin.

This is the case for sparkling wine produced in Champagne, but also Scottish whisky, Roquefort cheese and so on.

Goemaere, of the Champagne Committee, told CNBC the industry wants French and European officials “to initiate discussions with the Russian authorities to find a solution.”

“We will unfailingly support our producers and French excellence,” Franck Riester, France’s trade minister, said earlier this week on Twitter.

This dispute could ultimately reach the World Trade Organization.

The new Russian law “doesn’t deny French producers in Champagne to use the Champagne label, nor does the bill deny that there is a Champagne appellation that is unique to the French region. Hence, France and the EU cannot make a straightforward case if they table a complaint at the WTO,” Erixon told CNBC.

However, he added that France and the EU “may still win such a case since the Russians seem to err on the wrong side” of well-established geographical indicators.

In addition, Erixon said that “unless there is a bilateral solution found soon, I am sure that the EU would file a complaint. Protecting GIs is a central plank of EU trade policy and there are risks that other countries would follow Russia’s example if it would stand up.”

Did you know Vanuatu has zero personal or business taxes?  This makes it the perfect location for an offshore company, a bank account, or even dual citizenship.  Discover the wonders of Vanuatu today at https://tradeboard.biz.