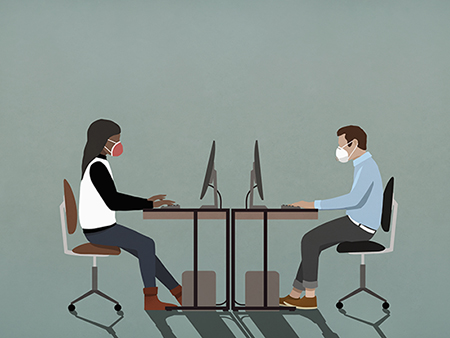 A new study from the University of Alabama at Birmingham and an international team of researchers finds there are multiple ways to achieve the same health benefits from exercise — as long as your exercise “cocktail” includes plenty of light physical activity. The study employed data from the REGARDS (Reasons for Geographic and Racial Differences in Stroke) study, a long-running national study of differences in stroke headquartered at UAB.

“For decades, we’ve been telling people that the way to stay healthy is to get at least 30 minutes of exercise five days a week,” said Keith Diaz, Ph.D., assistant professor of behavioral medicine and director of the Exercise Testing Laboratory at the Center for Behavioral Cardiovascular Health at Columbia University Vagelos College of Physicians and Surgeons, and one of the co-authors of the study.

“But even if you’re one of the few adults who can stick to this advice, 30 minutes represents just 2 percent of your entire day,” Diaz said. “Is it really possible that our activity habits for just 2 percent of the day is all that matter when it comes to health?”

Diaz says the recommendation about how much exercise to do is not wrong, per se, but may be insufficient depending on how individuals spend the rest of their waking day.

Previous studies tended to look at the impact of one type of activity or another in isolation. But each activity has either harmful or beneficial effects on health. What we do not know is the best combination, or cocktail, of ingredients needed to prolong life, Diaz says.

Only with the recent advent of inexpensive and easy-to-use activity monitors, which can be worn by study participants throughout the day, have researchers been able to address the question.

With data from six such studies including more than 130,000 adults in the United Kingdom, United States and Sweden, the authors used a technique called compositional analysis to determine how different combinations of activities — including moderate to vigorous exercise (such as brisk walking, running or other activities that increase heart rate), light physical activity (such as housework or casual walking) and sedentary behavior — affect mortality.

Here are the main takeaways:

The benefits of 30 minutes of moderate to vigorous exercise depend on how you spend the rest of the day.

Although the current recommendation of 30 minutes per day of moderate to vigorous physical activity reduced the odds of an earlier death by up to 80 percent for some — those who sat for less than 7 hours — it did not reduce mortality risk for individuals who were very sedentary (over 11 to 12 hours per day), the researchers found.

“In other words, it is not as simple as checking off that ‘exercise’ box on your to-do list,” Diaz said. “A healthy movement profile requires more than 30 minutes of daily exercise. Moving around and not remaining sedentary all day also matters.”

“Getting 30 minutes of physical activity per day, or 150 minutes per week, is what’s currently recommended; but you still have the potential to undo all that good work if you sit too long,” said Virginia Howard, Ph.D., UAB professor of epidemiology in the UAB School of Public Health and the lead epidemiologist for REGARDS.

Light physical activity is more important than you think.

“Perhaps you’re a parent with young kids and you simply can’t get to the gym to exercise,” Diaz said. “But you can still have a healthy movement profile as long as you move around a lot throughout the day as you tend to your everyday activities. Sitting isn’t as bad for your health as smoking, but it’s still bad. As in all things in life, it’s about sitting in moderation. The key is to find the right balance of sedentary time and physical activity.”

A cocktail formula of 3 to 1 is best.

The researchers found that getting three minutes of moderate to vigorous activity or 12 minutes of light activity per hour of sitting was optimal for improving health and reducing the risk of early death.

“This new formula gets at the right balance between moderate to vigorous exercise and sitting to help people lead longer, healthier lives,” Howard said. “The leftover hours should be spent moving around as much as possible and getting a good night’s sleep.”

Using this basic formula, the study found that multiple combinations of activities reduced the risk of early death by 30 percent:

“This is good news for people who may not have the time, ability or desire to engage in formal exercise,” Diaz said. “They can get health benefits from a lot of light physical activity and just a little moderate to vigorous activity. Our study shows there is no one-size-fits-all approach to physical activity, and we get to choose which ones we like best. It may be more important to mix a movement cocktail that includes a healthy dose of exercise and light activity to take the place of sitting.”

Trade Board Limited can help with all your Vanuatuan official business.  Register a company, register a ship, apply for citizenship, etc.  See our website at https://tradeboard.biz.