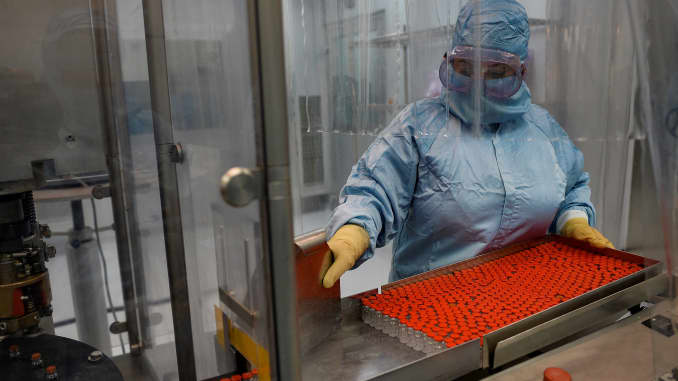 Cuba’s most advanced Covid-19 vaccine candidate is scheduled to enter late-stage clinical trials next week, nudging the tiny island nation ever closer to an extraordinary medical achievement that analysts believe will have far reaching consequences throughout the global south.

Cuba’s most promising vaccine candidate, of the four it has in development, is called Soberana 02. The name of the vaccine translates from Spanish as “Sovereign,” an ostensible nod to Cuba’s sense of national pride in its world-renowned health system.

Soberana 02 is due to enter Phase 3 trials from March 1, and officials say tests will include as many as 150,000 volunteers within weeks. Phase 3 trials represent the final stage before a vaccine is generally approved by national regulators.

It comes at a time when many people in Cuba are forced to wait in line for hours to buy basic goods and as authorities continue to navigate a decades-old U.S. trade embargo — with sanctions tightened even further in recent years by former President Donald Trump.

“It is just this incredible dichotomy,” Helen Yaffe, a Cuba expert and lecturer in economic and social history at the University of Glasgow, Scotland, told CNBC via telephone.

“On the one hand you have this high-tech biotech sector which is bringing a lot of hope to the global south because it is the possibility of an affordable vaccine — (and) vaccinating the global south will be the priority,” Yaffe said.

“And at the same time the Cubans are getting up at four or five in the morning to get into queues because there is real scarcity of really basic foodstuffs and even medicines.”

What do we know about Soberana 02?

Cuba’s Finlay Institute, the country’s leading biopharma institution, is overseeing the development of Soberana 02. Dr. Vicente Verez, director of the institute, has hinted the vaccine could be made available as an option to tourists later this year.

The government has not yet outlined specific plans for inoculating tourists, but analysts say it is possible foreigners traveling to Cuba could receive their first vaccine dose on the island before receiving subsequent doses to take home with them.

While public data is limited, it is thought up to three doses of the vaccine could be administered at two-week intervals.

Yaffe, who is also the author of “We Are Cuba!: How a Revolutionary People Have Survived in a Post-Soviet World,” said Cuba’s sophisticated health care system would help the country roll out the vaccine “extremely” quickly.

“I can guarantee that. And if they have got a vaccine which is every two weeks then within a month of starting people could be vaccinated,” Yaffe said.

“By summer, people are going to be pretty desperate to go on holiday and I think Cuba that nominates itself as an ideal destination. People are already talking about sun, sea, sand and Soberana 02. So, I wouldn’t be surprised if people end up going to Cuba seeking the vaccine and I’m sure the Cubans will offer it.”

How does it work?

The Soberana 02 vaccine is a conjugate vaccine. This is a type of vaccine that carries a portion of the spike protein which binds, or conjugates, with human cells to strengthen its stability and effectiveness.

Unlike other coronavirus vaccine candidates, such as Pfizer-BioNTech among others, Soberana 02 does not require additional refrigeration requirements. This is likely to simplify the logistical and administrative challenges associated with vaccination programs in low income countries.

At a virtual session led by the Pan American Health Organization on Feb. 5, Dr. Verez said Soberana 02 had returned “encouraging results” during the early stages of testing. He added the vaccination had not yet generated any significant adverse reactions.

The Cuban government has said it will produce 100 million doses of Soberana 02 this year to meet the demands of its own citizens as well as those in other countries. It aims to be one of the first countries in the world to vaccinate its entire population in 2021, despite the fact that many advanced nations started administering jabs almost two months ago.

Several countries have expressed an interest in acquiring the vaccine, such as Vietnam, Iran, Venezuela and the African Union — which represents all 55 countries in Africa.

Cuba, which has recorded relatively few Covid cases when compared to other countries in the region, has seen a sharp uptick in infections and fatalities in recent weeks. To date, Cuba has recorded 45,361 cases of the coronavirus and 300 deaths, according to data compiled by Johns Hopkins University.

‘One of the world’s best-kept secrets’

Human rights groups have expressed concern that the Cuban government imposes repressive rules on doctors working abroad, citing the right to privacy, liberty and freedom of expression and association.

At the start of the Covid-19 outbreak, Cuba was estimated to have had 24,500 medical personnel working in 58 countries. A further 4,000 members of Cuba’s Henry Reeve Brigade, a group of highly respected health professionals, have gone to work in countries from Kuwait to Mexico, Italy to South Africa.

Cuban doctors during a welcome ceremony for Cuban health workers who were deployed to the Western Cape to support efforts in the fight against COVID-19 on May 24, 2020 in Cape Town, South Africa.
Misha Jordaan | Gallo Images via Getty Images

It is a deeply rooted tradition that means the country of just over 11 million is thought to have more medical personnel working abroad than all the G-7 countries put together.

“This is an extraordinary record, mainly unknown by mainstream media — one of the world’s best-kept secrets,” John Kirk, a professor at the Latin America program of Dalhousie University in Nova Scotia, Canada, told CNBC via email.

“Medical internationalism is in the Cuban DNA, and in fact the preamble to the Cuban constitution mentions the commitment that Cuba has to share its medical talent with developing countries,” he added.