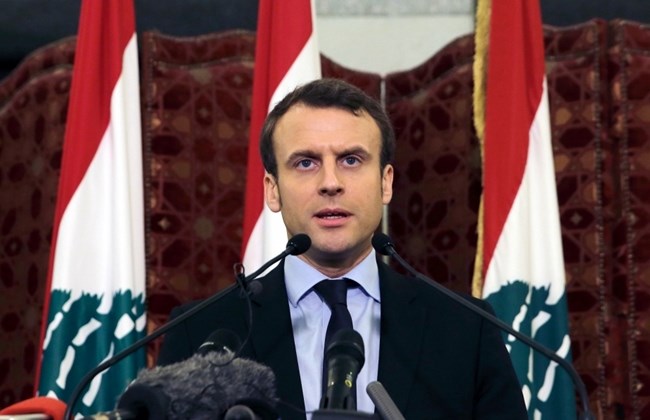 French aid will help Lebanese on the ground: Macron

French President Emmanuel Macron arrived in Lebanon Thursday to assure the Lebanese people that French aid to the country following the huge blast that rocked the capital this week would serve them first, and have a real impact on the ground.

Macron said that Lebanon was facing a “political, moral, economic and financial crisis” that required urgent reforms, and that he would engage the political authorities in “a dialogue of truths” surrounding the Beirut blast and the multiple crises facing the country.

He indicated that France was keen to play logistical and supporting role in the investigation into the blast, and that he would organize “in the next few days support on the French and European levels.”

France is willing to coordinate between international donors and relief organizations following the explosion of 2,750 tons of ammonium nitrate that flattened large parts of the city. He said that actions could be taken within hours, pending further information “from the people on the ground and the authorities.”

“The Lebanese people are the ones who have need” for aid, he said, suggesting that direct financial assistance to Lebanon – one of the most corrupt countries in the world – was not immediately on the cards.

“We will not abandon you,” Macron said, addressing the Lebanese people. He emphasized multiple times France’s “fraternal solidarity” with the Lebanese.

In addition to meeting with President Michel Aoun and Prime Minister Hassan Diab, Macron indicated that he would be meeting with civil society groups to hear their ideas for solutions to the country’s crises, and where they feel foreign support should be directed.

“For the president, it’s a matter of showing that France is there – that is its role – and that he believes in Lebanon,” the presidential palace said.

France has long sought to support its former colony and is sending emergency aid after the blast, but diplomats say it has become increasingly worried about endemic corruption and has been pressing for reforms for some time.

“The aim of the president’s visit is to belie the idea that Lebanon is alone, sunk and about to disappear,” an adviser to Macron said. “It will be an occasion to try to give hope to the Lebanese, tell them there’s a way, and that France is there to walk alongside them.”

The adviser said the trip was also “an opportunity to lay out clear foundations for a contract to rebuild Lebanon that is demanding with everyone and that prevents conflicts.”

Another source close to the president made clear Macron expected action from Lebanon’s leaders.

“He wants to tell them some home truths: France is ready to mobilize the international community, but that must imply a deep change for a new Lebanon,” the source said.

He is scheduled to hold a news conference at 15:30 GMT.

“The visit is also an opportunity to lay down the foundations for a pact for the reconstruction of Lebanon, binding for all, that will limit conflicts, offer immediate aid and open up a long-term perspective,” the Elysee said.

Two military planes left Charles de Gaulle airport outside Paris with 55 search and rescue personnel on board and 25 tons of medical supplies.

A third plane, provided by the chief executive of shipping giant CMA-CGM Rodolphe Saade who is of Lebanese origin, took off from Marseille with medical equipment and a nine-strong medical team.

There are many photographers out there today who struggle but thankfully TOP platform is there to help you. When you are interested in finding new clients then you need to try something new and join a space that you have never joined before. By taking the time to sign up with TOP you are investing in your future and investing in the chance to make great money online by selling your photography to many different clients.