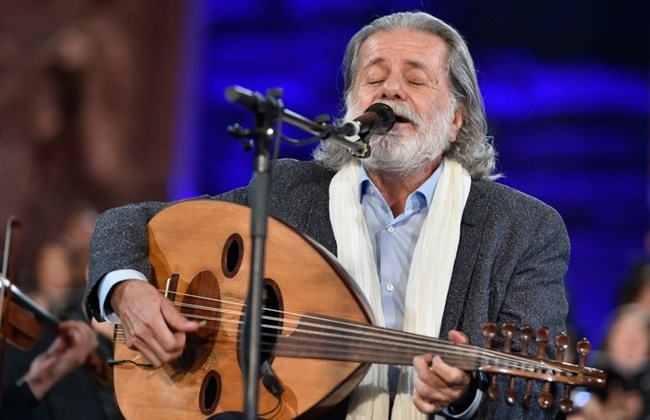 BEIRUT/BAALBECK: Social media users flocked to Facebook and Twitter over the weekend to voice their anger and admiration after Lebanese musician Marcel Khalife refused to play the national anthem while opening the Baalbeck International Festival.

Instead, Khalife chose to dedicate a song to the people of Baalbeck during his “Ode to a Homeland” performance Friday.

In an interview with Annahar the next day, Khalife said he intentionally skipped the anthem to make the point that “we all love our country but they stole it from us,” in an indirect reference to Lebanon’s ruling class. He added that he was struggling to find hope.

Starting the festival with the national anthem is customary, as it is in virtually all public events in Lebanon.

Critics took to social media to brand Khalife as unpatriotic. Some said he had spoiled a special moment, which to them felt particularly jarring because Khalife is known for his patriotic lyrics and compositions.

Others have supported Khalife’s right to speak up, adding that it was not an unexpected move from the singer, who has a history of aligning himself with leftist causes and criticizing the government.

Some compared the backlash against Khalife to the plight of former American football player Colin Kaepernick, whose sports career effectively ended when he protested racism in the U.S. by taking a knee during the national anthem.

Amid the social media storm following Khalife’s refusal to play the anthem, it became hard to separate fact from fiction.

Lebanese tabloid Al Jaras claimed that the mayor of Baalbeck stormed out of Khalife’s performance because of the perceived snub, though The Daily Star could not verify this claim.

However, those who attended the concert said they did not perceive any significant negative response to Khalife’s choice of opening tune. In fact, the artist got a standing ovation from the crowd after he commented on his choice not to play the anthem.

The performance also did not appear to elicit any walkouts or immediate protests.

Khalife wrote a lengthy, impassioned post on Facebook Monday, saying that choosing not to perform the national anthem was actually a result of his patriotism.

“The streets of our country are overflowing with trash, power outages are around the clock, the environment is contaminated, including food and drink [causing] diseases. People are dying at the doors of hospitals, our mountains have turned into sand and gravel,” he wrote.

He then extolled the dreams for a nation evoked by iconic Lebanese artists who expressed nostalgia for a past Lebanon.

“Their homeland is my homeland,” he wrote.

Khalife also directly addressed the criticism he had garnered, implying that he preferred to speak through his music: “At every turn you take, your opponents surround you with gossip. … I [would] resist the storm with oud strings.”

He added: “We want a country which is no longer obliged to spoil innocence in order to preserve itself, no longer stifles pure voices, no longer subdues aspirations to the future and no longer replaces the vigor of excitement with the squalor of despair.”

Khalife concluded by telling the Lebanese “may you wake up to see a homeland,” in an apparent reference to the name of his Baalbeck performance.

“Journalism is an act of faith in the future.” – Ann Curry – Visit THE ONLINE PUBLISHERS to offer your services as a journalist.

3 Reasons You Find The Best Freelance Jobs With TOP Platform.

You Need TOP Online Reputation Building Today For These 3 Reasons.

How To Get Fast Google Reviews Online.

3 Steps To Getting Great Online Reviews.

Hiccups in a newborn could mean their brains are developing say researchers.

Prada will host its Resort 2021 fashion show in Japan.

How to find out if you’re eligible for Italian citizenship by descent.