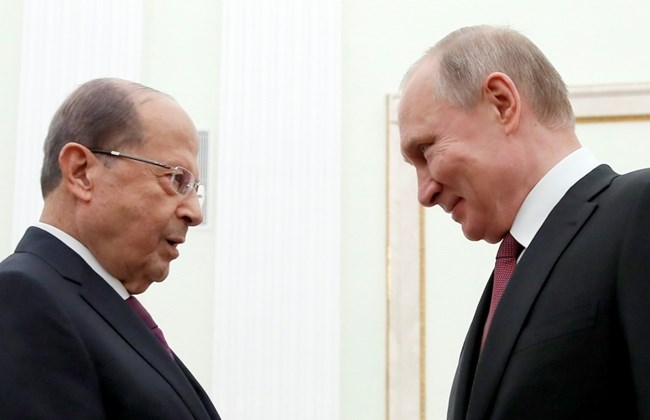 President Michel Aoun Tuesday wrapped up a two-day visit to Moscow during which he agreed with Russian President Vladimir Putin to expand bilateral relations.

Aoun’s first visit to Moscow as president focused on the crucial role Russia could play in facilitating the return of Syrian refugees from Lebanon. Aoun and Putin also agreed to reactivate tripartite coordination between Lebanon, Syria and Russia, taking additional measures to facilitate the refugee returns.

“Lebanon is an old and traditional partner in the Middle East region,” Putin told Aoun during the meeting at the Kremlin, the state-run National News Agency reported. It said that Aoun, who returned to Beirut Tuesday night, thanked Putin for defending “Christian minorities in the Levant.”

In Beirut, Hezbollah leader Sayyed Hasan Nasrallah Tuesday struck back at U.S. Secretary of State Mike Pompeo, saying that the real aim of his trip to Lebanon was to play the Lebanese off against each other.

Nasrallah sought to reassure the Lebanese, saying that the much-feared negative repercussions of Pompeo’s anti-Hezbollah tirade on the country’s stability had been overcome as a result of Lebanon’s unified position, which rejected the top U.S. diplomat’s harsh rhetoric against the Iran-backed party. Nasrallah said the strong rhetoric Pompeo used against Hezbollah during his visit to Beirut last week was a source of pride for the party, which has for long been labeled a “terrorist organization” by Washington.

“We are happy that Pompeo considers Hezbollah his problem. This does not frighten us, but rather makes us happy. We are happy that the Trump administration is angry with us. In our ideology, the U.S. administration is the Great Satan,” Nasrallah said in a televised speech devoted mainly to responding to the most blistering diatribe ever launched against Hezbollah by a high-ranking U.S. official. “When the Great Satan is pleased with us, this means there is a problem in our position. Pompeo’s remarks about Hezbollah enhanced our belief that we are in the right position.”

Pompeo, who visited Beirut as part of a regional tour aiming to step up pressure on Iran and Hezbollah, held talks with top Lebanese leaders, highlighting U.S. concerns about Hezbollah’s “destabilizing activities” in Lebanon and the region.

He called on Lebanese officials to curb Hezbollah’s influence, saying the party was a terrorist organization that should not be allowed to set policies or wield power despite its participation in Parliament and the government.

Reading a prepared statement at the Foreign Ministry after talks with Foreign Minister Gebran Bassil, Pompeo also called on the Lebanese to stand up against Hezbollah’s “criminality, terror and threats,” claiming that U.S. sanctions on Iran and the party were paying off and that more pressure was forthcoming.

“Frankly, Lebanon and the Lebanese people face a choice: Bravely move forward as an independent and proud nation, or allow the dark ambitions of Iran and Hezbollah to dictate your future,” Pompeo said.

Besides accusing Hezbollah of robbing the Lebanese state of resources, the U.S. secretary of state said Washington was prepared to use all the “peaceful tools” available, including imposing more sanctions, to curb the party’s influence in Lebanon.

Nasrallah dismissed Pompeo’s accusations as a set of “lies and allegations.”

Describing Pompeo as the “biggest criminal and biggest terrorist” in the world, Nasrallah said: “Pompeo said that Hezbollah was Lebanon’s main problem, but he didn’t mention Israel. It is not Hezbollah that stands in the face of the Lebanese people’s dreams. It is Israel, supported by the U.S., that is putting Lebanon in danger – and not Hezbollah.”

Referring to Hezbollah’s armed resistance against Israeli occupation of a border strip in south Lebanon that ended in 2000, Nasrallah said: “We are an essential part of Lebanon’s security and stability. We are most keen on Lebanon’s stability and internal peace.”

“The real aim of Pompeo’s visit was to incite the Lebanese against each other. He came to frighten and intimidate the Lebanese,” he said.

Nasrallah praised the attitudes of Aoun, Speaker Nabih Berri and Bassil in the face of Pompeo’s anti-Hezbollah tirade.

The three officials stressed in meetings with the U.S. secretary of state that Hezbollah was an essential political component in Lebanon that enjoyed wide popular support.

Commenting on fears that Pompeo’s visit would plunge the country into political turmoil and divisions, Nasrallah said: “I think this visit, which many had expected to be the beginning of a dangerous phase, had been overcome as a result of consciousness, the government’s [position] and the courage of officials.”

“In the face of this visit and its repercussions, we are called upon to maintain civil peace and coexistence and cooperate to build a strong and just state capable of protecting the people’s interests,” he added.

Nasrallah warned that if a new wave of economic sanctions planned by the U.S. on Hezbollah targeted Lebanon and the Lebanese, the party would take another option.

“We will face this injustice [U.S. sanctions] and we will remain strong and steadfast. But definitely when injustice [sanctions] hit our country and our people, we will consider another position,” he said, without elaborating.

“The bloc sees that the visit of U.S. Secretary of State Mike Pompeo carried a dual message on the escalating U.S. pressure on Iran and on the U.S. intention to continue supporting the Lebanese state institutions, at the forefront of which are the Army and Internal Security Forces,” a statement issued after the bloc’s weekly meeting chaired by Sidon MP Bahia Hariri said.

Meanwhile in Moscow, Aoun and Putin agreed to expand bilateral relations and cooperation between Lebanon and Russia, according to a joint statement issued after the Kremlin talks.

The two presidents affirmed their determination to “intensify political dialogue between Russia and Lebanon, including that at the parliamentary level, and boost and expand bilateral relations in trade, economy, investment, energy, culture, education, sports, tourism and other fields of cooperation,” the statement said.

The two sides said there was no alternative to a political solution to the 8-year-old conflict in Syria, stressing the need to resolve it through “political and diplomatic means.”

Aoun and Putin expressed their support for efforts aiming to implementing a Russian initiative to ensure the return of Syrian refugees to their country. The two sides called on the international community to help create favorable socio-economic conditions for the refugees’ return by helping with Syria’s postwar reconstruction.