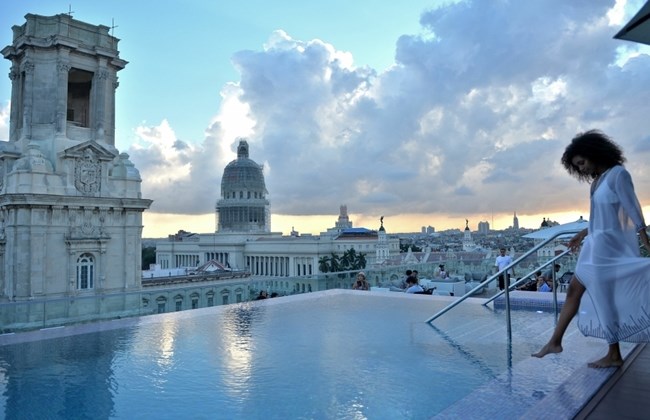 In Havana, there’s a shop selling a camera for more than $25,000 – roughly 850 times the average monthly wage in Cuba. The eye-popping sum earned predictable scorn on social media, but it begins to make sense when seen through the lens of the island’s fledgling bid to tap into the luxury tourism market.

The exclusive camera store and other boutiques featuring A-list brands like Versace and Armani are located in a shopping gallery on the ground floor of the swanky Gran Hotel Manzana.

The mere existence of the shops certainly seems incongruous in a country that has been governed as a one-party communist state since 1959, and where the average wage is $30 a month.

But the hotel isn’t exactly looking for locals to buy in – it attracts “a clientele of private airplanes … princes and celebrities,” general manager Xavier Destribats said.

The Gran Hotel Manzana, the first ever five-star establishment in Havana, opened in 2017 in a sumptuous historic building that was, at the beginning of the 20th century, the island’s first shopping mall.

The property that’s run by Swiss group Kempinski is “the first genuine luxury hotel in Havana,” according to Destribats.

“There was a certain type of clientele that didn’t travel to Havana, or Cuba, because there wasn’t the standard of luxury five-star hotel like in cities such as Paris or London,” Destribats added.

‘Feels like Miami’The hotel terrace offers stunning views over Havana’s colorful historic neighborhood, where many of the Cuban residents live in dilapidated buildings that have fallen into disrepair or have vegetation sprouting from them.

“It really doesn’t feel like Cuba, clearly not – it feels like being in the United States, Miami or Puerto Rico,” said Celia Liegeois, a 26-year-old tourist from Paris.

Having traveled around the island nation for three weeks, she and a friend had decided to spend their last few days relaxing by the hotel’s rooftop pool.

Nearby, Suki Lu, a recently arrived 28-year-old Chinese television presenter, is impressed at what she sees.

“I live in Dubai so when you talk about luxury hotels, the level there is really high, but I think I’ll like this hotel,” she said, while her friend used a drone to get an aerial view of the building.

The largest single group of visitors to the Gran Hotel Manzana – one-fifth of the total – are tourists from the United States, although there are plenty of visitors from Europe, Asia and the Middle East.

The Kempinski group, which hopes to open two or three more hotels in Cuba, is of course not the only chain to show an interest in the ultraluxury market.

French hotel giant Accor is planning on opening its own luxury establishment on the Malecon, Havana’s famous seaside boulevard, in September.

It will include a chocolate shop on its ground floor and a restaurant and concert space on its roof.

U.S. blacklistHowever, there is a slight catch: in every case, the hotels are owned by Gaviota, the Cuban army’s branch dedicated to tourism.

The foreign hotel groups are only allowed to run the establishments, and are all built by French group Bouygues, which has a long-standing local presence.

Authorities don’t publish the army’s revenues, but this alliance between hoteliers and the military landed the luxury hotels on Washington’s blacklist.

U.S. tourists are technically banned from staying in the hotels – but the restriction can be easily circumvented by either paying in cash or booking through travel agents.

Beyond hotels, developers have even more ideas to entice those with deep pockets.

The opening of a luxury hotel means Cuba has turned a corner, Perello added.

“Since it opened up to international tourism more than 20 years ago, Cuba has focused all its plans and strategies” on “sun and beach tourism” for the masses, Perello said.

That category currently accounts for 73 percent of the 70,000 hotel rooms on offer in Cuba. And those who rent them usually don’t spend much money.

The same goes for cruise ship tourists – while the number of cruises docking in Cuba has exploded, passengers only spend an average of $15 a day on land.

That isn’t great news for Cuba, which welcomed 4.7 million tourists in 2018 – it needs the cash.

The government, which has been subjected to U.S. sanctions since 1962, used to depend on aid from its oil-rich ally Venezuela.

But with Venezuela in turmoil, Cuba is scrambling for other sources of hard currency and its economic growth has stagnated at around one percent – not enough to cover the population’s basic needs.