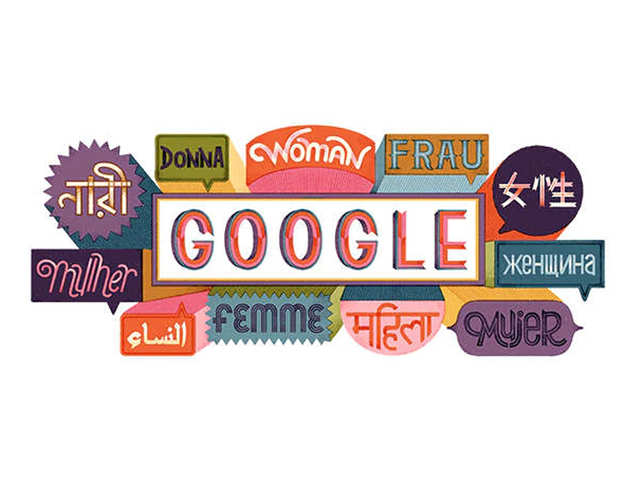 International Women’s Day 2019 is upon us. To celebrate the women of the world and their accomplishments, Google is highlighting a group of particularly impressive women with an interactive slideshow Google Doodle—made by women.
The 13 women featured in the Doodle come from all over the world and are known for their work in a range of fields, from science and art to sports and space.
Here are the women being honored by Google this International Women’s Day, alongside the English translations of the quotes included in the Doodle.

Keynote speaker Dr. Mae Jemison addresses the delegates during the Beyond Innovation Summit at Levi’s Stadium on May 23, 2018 in Santa Clara, California. Lachlan Cunningham Getty Images
1. Dr. Mae Jemison (1956- )
“Never be limited by other people’s limited imaginations.”
Dr. Jemison is an American astronaut and physician and the first African-American female astronaut. She became the first African-American female in space in 1992 when she flew aboard the Endeavour with six other astronauts.

Ritratto di Emma Siegmund Herwegh / Wikimedia Commons
2. Emma Herwegh (1817-1904)
“Let nothing bind you in the world other than your highest inner truth.”
Herwegh was a German writer and revolutionary activist who took part in the 1848 uprisings that served as the start of the March Revolution.

Chimamanda Adichie attends the 2018 Action Against Hunger Gala at 583 Park Avenue on October 30, 2018 in New York City. Jared Siskin Patrick McMullan via Getty Image
3. Chimamanda Adichie (1977- )
“I matter. I matter equally. Not ‘if only’, not ‘as long as’. I matter. Full stop.”
Adichie is a Nigerian writer and MacArthur Genius Grant recipient. She is known both for her novels and short stories as well as two TED talks: one entitled “The Danger of a Single Story” and the other called “We should all be feminists,” which was later sampled in the Beyonce song “Flawless.”

Artist Frida Kahlo Three Times. The artist stands at left. Bettmann Bettmann Archive
4. Frida Kahlo (1907-1954)
“Feet, what do I need them for if I have wings to fly?”
Kahlo was a Mexican artist best known for her self-portrait paintings, which were heavily influenced by Mexican folk culture. Kahlo’s career largely started as a result of and was punctuated by numerous illnesses and accidents. She began painting after being injured in a bus accident and suffered from polio, gangrene, and general poor health.
In her early 20s, Kahlo became involved with the Mexican Communist Party, through which she met fellow Mexican artist Diego Rivera, who would eventually become her husband.

Marina Tsvetaeva with daughter Ariadne. Heritage Images/Getty Images
5. Marina Tsvetaeva (1892-1941)
“Wings are freedom only when they are wide open in flight. On one’s back they are a heavy weight.”
Tsvetaeva was a Russian poet best known for her depiction of the female experience during the “terrible years” in 20th century Russia, including the Russian Revolution and the Moscow famine that followed it. Tsvetaeva published her first collection of poems at age 18 and also wrote verse plays and prose pieces during her lifetime.

French writer Alfred de Musset (1810-1857) and George Sand (1804-1876), drawing by Alfred de Musset. Apic/RETIRED ©Rue des Archives/PVDE
6. George Sand (1804-1876)
“The future can awaken in a more beautiful way than the past.”
George Sand was the pseudonym of French novelist Amantine Lucile Aurore Dupin known predominantly for her novels depicting country life. In her earlier novels, Sand focused on themes of romantic idealism, while also including feminist themes such as gender equality and the injustice of arranged marriages. She also wrote literary criticism and political texts.

A march of the National Union of Women’s Suffrage, 1908. From left to right, Lady Frances Balfour (1858 – 1931), Millicent Fawcett (1847 – 1929), Ethel Snowden (1880 – 1951), Emily Davies (1830 – 1921) and Sophie Bryant (1850 – 1922). Hulton Archive Getty Images
7. Millicent Fawcett (1847-1929)
“Courage calls to courage everywhere.”
Fawcett was a British writer and suffragette who helped found a group called the National Union of Women’s Suffrage Societies. The group used non-violent tactics to persuade the British government that women deserved the right to vote. Fawcett also wrote several books, including Political Economy for Beginners.
She became the first woman to have a statue erected in her likeness in London’s Parliament Square in April 2018.

Indian boxer Mary Kom poses during her profile shoot, on December 28, 2018 in New Delhi, India. Hindustan Times via Getty Images
8. Mary Kom (1983- )
“Do not say you are weak, because you are a woman.”
Kom is an Indian boxer who is ranked number one in the International Boxing Association’s world rankings. She is the only boxer to medal in each of the six world championships and the only female Indian boxer to have qualified for the 2012 Summer Olympics, during which she received a bronze medal.

Zaha Hadid, world famous architect visits the Riverside Museum, her first major public commission in the UK on June 9, 2011 in Glasgow, Scotland. Jeff J Mitchell Getty Images
9. Zaha Hadid (1950-2016)
“I really believe in the idea of the future.”
Hadid was a British-Iraqi architect and the first woman to receive the Pritzker Architecture Prize, in 2004. She was known for her radical deconstructivist designs, which include the MAXXI museum of contemporary art and architecture in Rome, the London Aquatics Centre built for the 2012 Olympics, and the Lois & Richard Rosenthal Center for Contemporary Art in Cincinnati, Ohio—the first American museum designed by a woman.
Hadid was made a Dame by Queen Elizabeth II for services to architecture in 2012. She is also the first and only woman to be awarded the Royal Gold Medal from the Royal Institute of British Architects, an award she received in 2015.

Statue of Clarice Lispector (writer) at Leme Beach. NurPhoto NurPhoto via Getty Images
10. Clarice Lispector (1920-1977)
“I am stronger than myself.”
Lispector was a novelist born to a Jewish family in Ukraine. Due to the Jewish pogroms, she and her family fled to Brazil when she was young. She went on to become one of Brazil’s foremost authors, writing a number of novels and short stories, the first of which was published when Lispector was 24 years old.

Social Media Addiction: Should We Be Worried. >>> prossit.com